I’ve fed in the car, I’ve fed at a bar, and on a plane, but I have yet to do it on a train. At the movies, at sushi, at ball fields and on the sand. I’ve even nursed with a drink in my hand! (But just one, so don’t get too excited!) 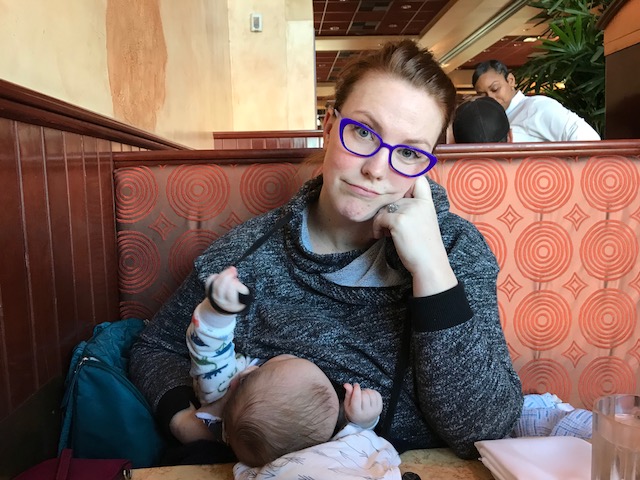 Odin is now 4 months old, and I am still exclusively breastfeeding, which if I’m honest, I’m shocked about. After delivery, it was my hope to be able to breastfeed, and if it went well, continue to do so. My lofty goal was 6 months and my realistic goal was 3. How I came to those numbers? No clue. I just knew that breastfeeding had been complicated and difficult for different women I knew, so I wanted to keep an open mind. And if I could swing it, I was going to do it exclusively unless supplementing was needed.

Odin is a happy growing boy who latches well, and other than the occasional laugh with milk running down the sides of his face or the quick pull away of his head while my nipple is still firmly in his mouth, we get on pretty great! But breastfeeding is no walk in the park. To be quite honest….it’s freaking hard! 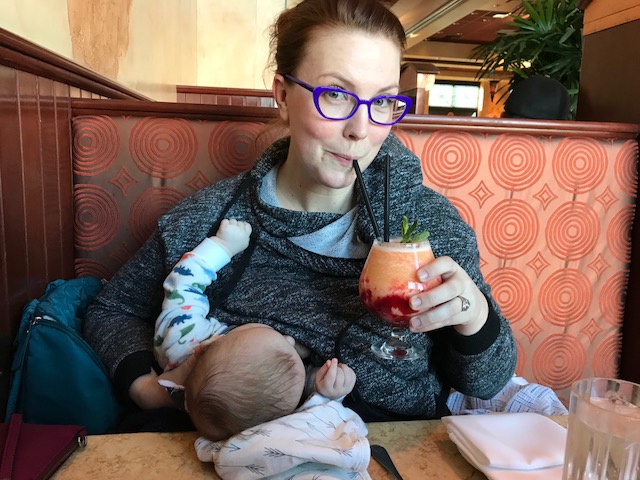 I have dealt with Mastitis once and several scares afterwards. We also went through a tough decision about his tongue and lip ties — which thankfully we did not have to have cut.

I also have pain in my neck and back pretty much every day which I’m guessing is due to looking down a majority of the day as well as the weight of my massive chest. And if he wakes one extra time at night to feed, that pain is exponentially worse the next day. We have tried many different positions, pillows, bras, etc to ease the pain, but I think that’s just the way my journey is going to go.

And that’s all just a fraction of what we could be dealing with!

Breastfeeding has really been back and forth for me. As I said before, I’ve dealt with lots of pain and frustration. I never knew that what some consider “going well” would be this damn hard. And there is ALWAYS someone with a suggestion to how you’re doing it wrong and it could be better (which most often my response is…I’ve tried that). But when considering it as a whole, I feel pretty much like a rock star. I think of all the places I’ve nursed that I never expected, and I feel downright BA!

No matter the breastfeeding journey, how short or long — mamas are made of some tough stock. The decision of how to feed your baby is a personal one and that can be tough with how quick to judge people can be. So here’s to all of us, just doing our best and hopefully in those tougher moments, remembering how totally kick ass we all are!