It took me a good few days to a week to process the Snoop Dogg and Friends concert in the actual LBC. Let me just tell you that some things have changed since I became a mother and last went to a music festival of this nature. I feel like I could write a thesis paper about it all, but here are my immediate takeaways that I like to call “When A Mom Sees Snoop Dogg…”

When A Mom Sees Snoop Dog

1. I am too old for festivals with Porta Potties, all-day standing, and constant stepping on trash and vomit. When I got home that night, my ankles were cankles. I needed more supportive footwear, like Dr. Dre meets Dr. Scholl’s.

2. It became clear to me that Snoop Dogg and Ice Cube really only belong on an album, being blasted in my car. Although there was momentary euphoria a few times (during “It Was a Good Day,” for example), their performances were underwhelming, if not poor. Snoop dialed it in, and his audio quality was pretty terrible with lots of feedback, complete with audio dropouts and fluctuations that perfectly highlighted the effects of smoking endless weed.

3. Snoop’s lyrics really stand out as problematic when you’re shouting them along with a sea of people (men) doing the same. Again, in my car alone, fine. But normalizing the woman-hating nature of his lyrics – especially with the state of the world right now when women are fighting for so much, including reproductive rights – felt bad. As it should.

4. I almost got into a physical altercation with a girl wearing a jean overall dress for the mere reason that she was drunk and bumped into me in a line and she thought I bumped into her – this happened twice. And OMG all the drunk and high people, kind of like lots of toddlers. Mom World is full of smiles and “Oh, excuse me’s,” and “No problem’s!” but this Osh-Kosh-B’Gosh-wearing biotch was ready to throw down for nothing. I’ve never been in a fight, but I think I could be pretty scrappy.

5. There was a part of Method Man and Redman’s set where they yelled “Let’s get retarded!” and then we were supposed to repeat it back to them, but all I could do was cringe and think about my warrior mom friends with disabled kids.

6. After Ice Cube’s performance, we stood there for over an hour waiting for Snoop to set up. This was hour four of standing. I won’t even wait in a thirty-minute line for “It’s a Small World” at Disneyland, so this felt hellacious. But good thing I brought my nightly pill I take because that gave me something to do for two seconds of that wait time. This was the first concert where taking my medication was a priority. #oldAF 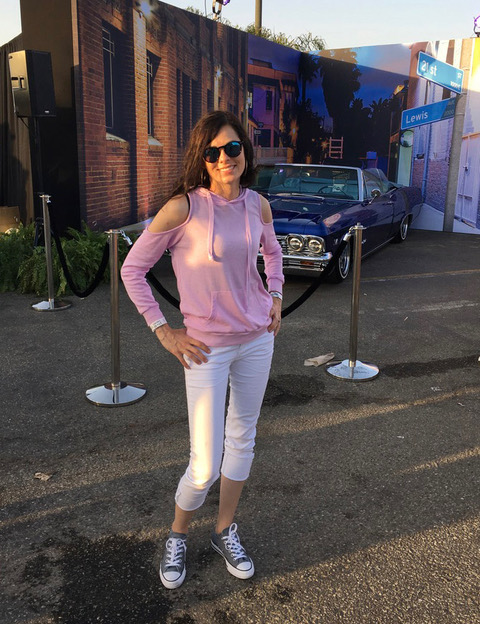 7. My husband used the “bathroom” and informed me there was no toilet paper or water to wash your hands with. I grabbed a handful of napkins – enough for myself and others – and headed to the Hellmouth of Porta Potties. It was my intention to share napkins with the ladies in line next to me (such a mom thing to do, I know), but it was clear to me that no one wanted to make small talk nor were sober enough to even care that they didn’t have TP. And of course I had hand sanitizer with me. #momlife

8. At the end of the night, we walked across a field covered in trash – bottles, cups, wrappers, spilled booze, cans – every step we took made a crunching noise and at some point my husband realized he had cups over his shoes. And then as we got to the main area, there were floaters and various pieces of garbage on allllll the ledges and tables. All I could think was, “Who is the unfortunate soul who has to clean this mess up??” Deep down in my mom heart, I knew that if we all just picked up one piece, it would’ve been so much easier for that sad sack janitor. Snoop should consider adding the “Clean-Up Song” to the end of his set list. Also, I was reminded why I never volunteer for clean-up duty at my kid’s school.

9. Staying up for something that starts at 10pm was rough. I felt like my son in the last leg of the Jog-A-Thon, where you want to quit but have to keep going because you’ve come this far.

10. I think I’m also too old (and sober) to watch the man in front of me basically have sex with the girl he was with, in public, inches away from us. He had her dress hiked up and was yanking her hair back forcefully and eating her face. I’m never letting my daughter go to any concert ever.

11. On the upside, I only thought about a potential mass shooting like five times throughout the night.

12. Going to this concert let me travel back to a time when I was young and carefree, before I entered Mom World. But you know what? Mom World has a lot going for it. Namely, plentiful toilet paper and hand sanitizer.

Guest writer – Brandy Ferner
For more of Brandy’s writing, honesty, and humor, check out her blog at https://www.adultconversationparenting.com and her “Adult Conversation” podcast on iTunes and the like.