My experience going through the Shark Tank casting process was an exhausting experience that lasted 6 to 7 months before I even got in front of the Sharks – Barbara Corcoran, Mark Cuban, Kevin O’Leary, Lori Greiner, and Robert Herjavec. That being said, it was well worth it, because it makes you prepare your brand in short descriptions, tidying up your words, and pushing yourself to understand how the consumer NEEDS to view your product from their perspective in order for it to be successful in their eyes. Granted, the way the Sharks and Shark Tank executives help to brand your product to the public eye doesn’t mean it’s their way or the highway, but it is helpful.

I can only speak on my own experience, but I was finally able to go in front of the Sharks on set, after being on the market for only 3 months!! That was it! I had been head deep the last two yrs prior with my co-founder Emily Doherty working with my patent attorney, figuring out tooling with my manufacturer, getting prototypes with the design. (We had so many designs in the beginning, OMG). Realizing this is all such an expensive task at the same time is incredibly scary. My life savings was gone in a blink of an eye. We had launched our Kickstarter campaign in Oct of 2017 and decided to exhibit our product Dare-U-Go! the same month at the ABC EXPO in Las Vegas. I think it’s safe to say that we were over ambitious and totally out of our minds trying to do all of the above with just a few prototypes under our belt. We actually had empty boxes at our exhibit making it look like we had boxes of inventory on hand but we had only had a few colors and 1 of each at that. Also, our kickstarter was 102% successful reaching over our pledged amount of $35,000.00 USD. It was the scariest time and the most exciting! The truth came out and that was our kickstarter campaign showed to be a product that people saw needed on the market and put their money where there mouth was. 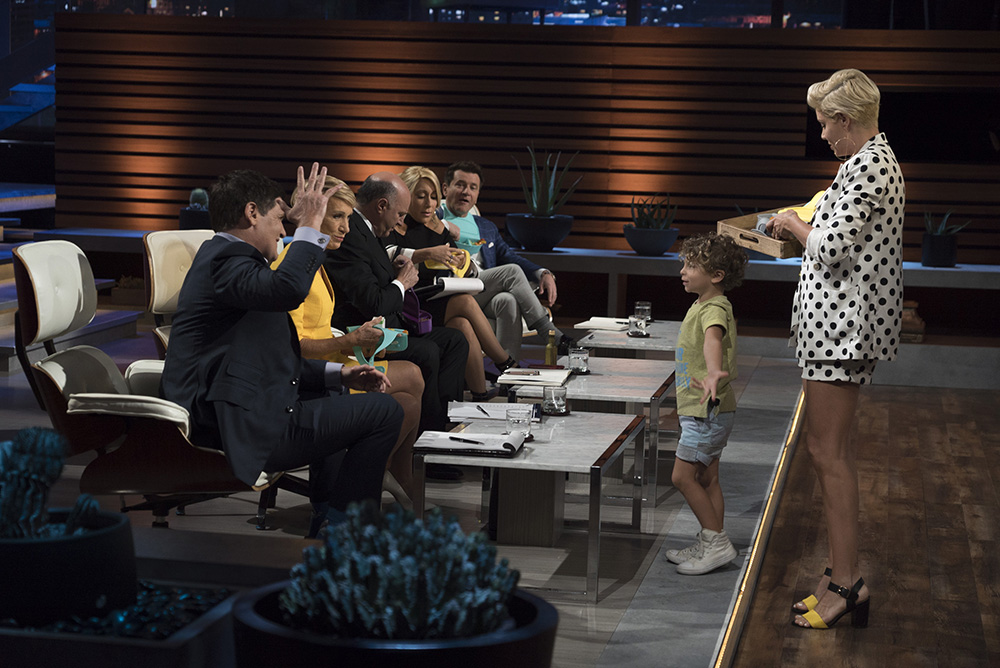 By the time I was standing in front of the Sharks, we were in 8 countries, selling exclusively on amazon, had exclusive distribution in Canada with Chotobaby, we were in Singapore, and the UK to name a few. So in those 3 months on the market I think we did damn good! We had a sales rep Kelli Ivie whom helped us tremendously. My husbands cousin Tracey Rosen is in product PR and she helped us tremendously also to get ready for market. I did not go to business school. I had not been training those 1st two yrs for the market, my main focus was creating a quality product. That being said I was GREEN! I was so green when it came to business and bringing a product to market. We did follow the lead on successful brands to kinda set a map for ourselves. Getting the opportunity to be on Shark Tank was such a blessing. It equals millions of dollars in marketing. Brands that are lucky enough to get on Shark Tank should really be so thankful.

Filming Shark Tank was an EXPERIENCE! for one, they drilled me for about 1 1/2 to 2 hrs! That’s right! The 12 minute segment you see on Shark Tank on TV was edited down to that amount. I was standing there forever. They drill you all at once, and you start feeling super defeated and trapped under those bright lights. I remember getting sweaty. I had gone in thinking I was definitely getting a deal. Why wouldn’t I? I had already been super successful, I wasn’t shy to the cameras and was giving it my all, super passionate about my product, it’s eco-friendly and I had all the facts about the market, the ever growing economy with the women in the work force, yada yada yada. Turned out, about 10 minutes in, the Sharks were trying to eat me alive! That’s when I realized I was nothing special and neither was my product in their eyes. I fought for my life in there under the lights. Kevin and Barbara were the two investors that went back and forth. I went with Barbara because Kevin offered his deal like it was a loan shark deal. It didn’t seem genuine. I always try to trust my instincts. Barbara’s deal came at the end and seemed well thought out and sincere.

Check out my youtube video where I explain my personal experience on Shark Tank.

To checkout Shark Tank episodes including mine go to Shark Tank ABC. My episode is 17 of season 10.